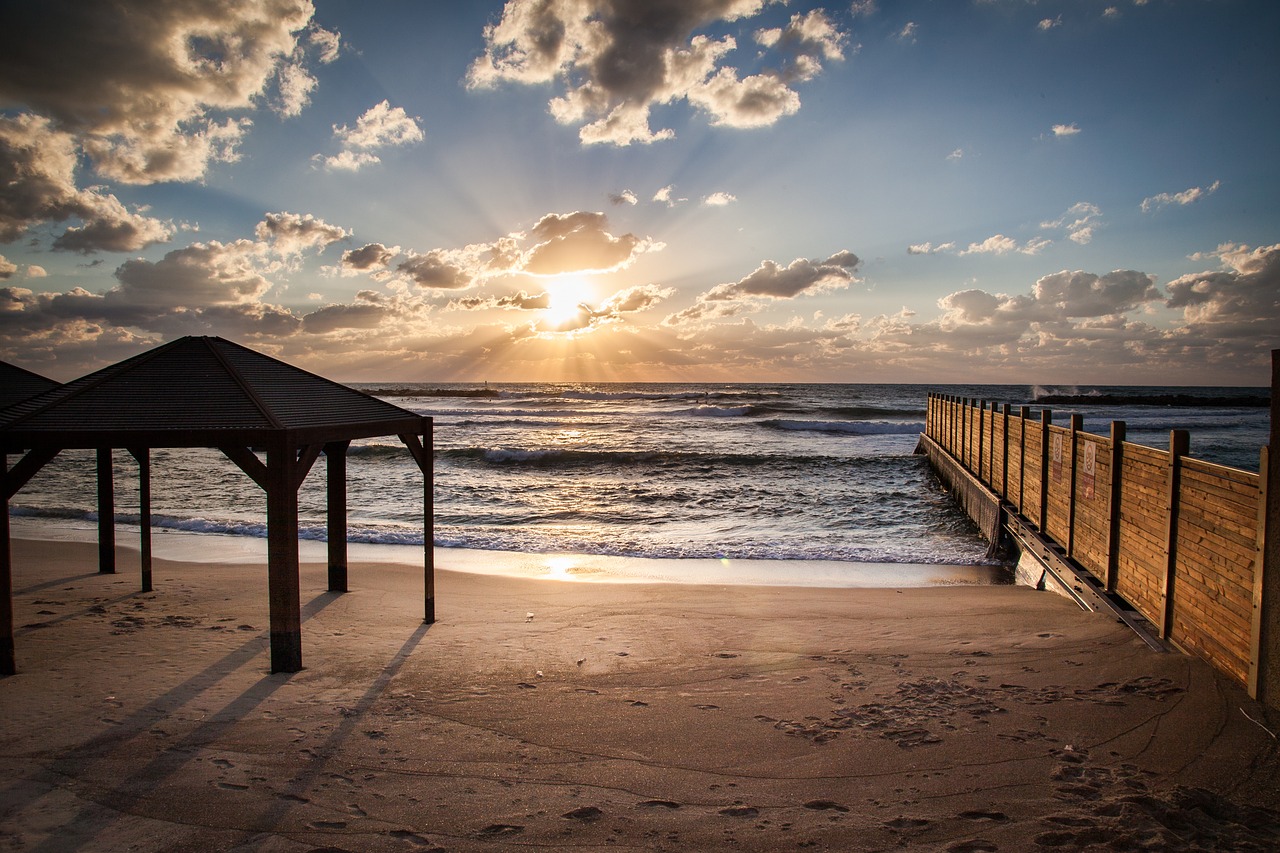 They say the sun is good for your health. Fortunately, one of the best things in Israel are the beaches. If you ever go to Israel, you would encounter a variety of beaches; some of them are very crowded, and some of them are nice and quiet. Here are the top 8 beaches in Israel from a local that used to surf and still dives. Before you go to the beaches in Israel, you must know several things: I’ll divide this list to more crowded and less crowded beaches; some of them have recreational activities.

The Gordon beach is in the middle of Tel Aviv, and you could train, play volleyball, kayak and even go swimming in the Gordon public pool. There are heaps of Israelis over there, especially in summer. There are also a lot of restaurants and hotels nearby. The entrance is free but the parking would cost you dearly.

The Sironit beach in Netanya has a basketball court and is the most popular beach in the Sharon area. You might hear a constant sound of matkot that would remind you of a sport that has no winners or losers.

A very touristic beach a little north from Tel Aviv. There’s a pleasant path right next to the beach and there are several beach clubs right next to it. It’s really comfortable, and there’s a lot of activities next to it. There’s no lifeguard on the beach, so make sure you check up on your children.

Stretches from Haifa till Atlit, you could find a lot of local Israelis try to surf, or tanning on the beach. It’s one of the most popular beaches in the northern part of Israel and has a lot of parties during the summer.

This beach is ranked as the most beautiful beach several years in a row. It’s located right to Achziv National park, which has ancient ruins from the Ottoman Empire. You could camp in the are many facilities you could use. There are no waves, but there are natural pools formed by the ocean and the rocks. A lot of people tent to come here in summertime, but if you come quite early you could enjoy the silence.

Taio Beach in Bat yam is very nice, and there are several other nice beaches in Ashdod. The Tel Aviv beach has other beaches that are just as good; Hilton, Tzuk (more Isolated). Sidney Ali Beach* is pretty great, too. Palmachim beach is beautiful but very crowded. Beit Yanai and Michmoret could work out great for you.

Here, you’ll get more of the Israeli beauty, but it comes with a price. Most of these beaches don’t have a lifeguard on board and requires a personal responsibility from the visitors.

One of the best places in Israel by far. There are bungalows, diving club (shipwreck!), fishermen, surfers, small bays, and great fish. You could even camp there for the night. The entrance to the beach will cost a small fee but it’s totally worth it.

The most southern place in Israel offers some of the best diving experience and beautiful beaches. The combination of desert and ocean is breathtaking. You could swim with some dolphins, but it’s not cheap. There are even chickens and goose hanging around with the visitors. A little disclaimer; it’s hot!

If we go up north from Sidney Ali beach we’ll find a beach located to ruins of an ancient fortress made by the crusaders. The beach doesn’t have a lot of people in it and looks amazing. It’s not easy to get there but it’s 100% worth your trouble.

Isolated, hard to reach, beautiful. Israel is a very stressed out country, and Ma’agan Michael beach is just the opposite. Some people do come there, but they aren’t noisy, very polite and very Israeli. Good people on a great beach.

It’s really hard to find Isolated beaches in Israel, but there are some nice ones that come to mind. Ga’ash beach* is very good, but don’t go too far out north. Habonim beach is quite awesome and worth a visit, during peacetime, Zikim beach is great to visit.

Beaches in Israel are the most popular attraction for Israelis

Israelis love to visit the beach every year. The peaceful and peace of mind is very important to them. Nevertheless, you should remember that in some places you will find an unbearable amount of Israelis. During the summer, I would recommend going on the weekdays to a relatively Isolated beach. Durin the Autom and Spring, every one of those beaches would be quite great. To be honest, we haven’t even talked about the sea of Galilee beaches here, but we have an extended article of things to do near the sea of Galilee. If you were in Israel, and would like to host Israeli travelers after you enjoyed it, you’re most welcome to download our app on Apple or Android.